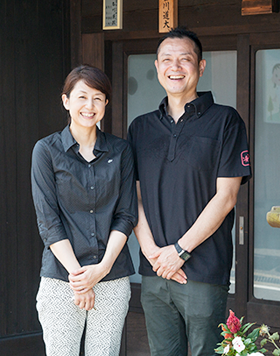 Ishikawa Paper Goods Ltd. was founded in 1902 as a paper-making materials supplier by the first company president, Doshun Ishikawa. Doshun Ishikawa's father was Toitsu Furuta, who worked on reclaiming land and flood control for Mino city in the early Meiji era.
Having inherited this indomitable spirit from his father, Doshun Ishikawa expanded his business to contribute to community development. He built the foundation for the present-day Ishikawa Paper Goods Ltd.
As the business was taken over by the second and third generation, although we faced many trials and difficulties, we continued to move forward faithfully to work for Mino Washi Japanese paper. Over one century since our founding, we now work on manufacturing Japanese accessories and Mino Washi paper goods.
The bond between families, employees, Mino Washi Japanese paper, and our hometown supported us through these many long years. And our spirit drives us to faithfully work toward what we believe in. Our company works together as one. We sincerely look forward to working with you.
Ishikawa Paper Goods, Ltd.
Michihiro Ishikawa, CEO, .
Yoshiko Ishikawa, Senior Managing Director

For loving people who struggle with work, housework and child care every day, Life is like sunny, rainy and weather, like the rich Japanese four seasons. Each person has an invisible precious thing and lives in life.
We at Ishikawa Paper Industries value the invisible world and hope that our products will make many people smile and feel energetic and happy. 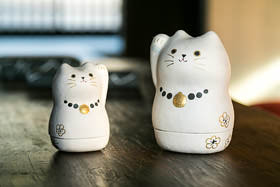 In our showrooms, you can look at Ishikawa Paper Goods' original Mino Washi Japanese paper goods and Japanese accessories, including our "Washi Korokoro," a wobbling cute animal figurine and our kawaii (cute) dolls. If you would like to visit, please make a reservation by telephone or by using our inquiry form (Contact us).
By car: 5 km (10 minutes) by car from the Mino Interchange on the Tokai Hokuriku Expressway.
By train: 1 km (10 minutes) on foot from the Mino train station on the Nagara River Railway.

The history of Ishikawa Paper Goods

Here we introduce our history for more than one century.

The spirit of Toitsu Furuta who loved his hometown, Mino

We cannot tell our company's history without story of Toitsu Furuta, who was father of the company's founder, Doshun Ishikawa. He was instrumental in reclaiming land and flood control for Mino city.
The clear waters of the Nagara River nurtured the industry known as "Mino Washi," but the people living in the basin had a history of battling against floods. In 1876, Toitsu Furuta worked with three of his comrades to plan and implement a reclamation of land around the Nagara river in order to save people from these struggles. He established Kyonosha company as a business to handle this matter and appointed himself president. The reclamation project around the Nagara river was frustrated again and again by floods and the Nobi earthquake, but Toitsu Furuta never gave up. He used his own property for these projects and finally succeeded in constructing the Dozuka embankment on the river over the periods of 15 years. It must have been a difficult decision for him to give up his son, Doshun, to be adopted by the Ishikawa family when he ran into financial difficulties partway through the project. What supported him through many trials and difficulties was surely his love of his hometown, his ceaseless desire to take on challenges, and his spirit of altruism.
The spirit of Toitsu Furuta, who never gave up in his work for the people and loved his hometown, became our indomitable spirit today, driving us to faithfully work toward what we believe in.

Ishikawa Paper Goods Ltd. was founded in 1902 by Doshun Ishikawa, an adopted son of the Ishikawa family that manufactured Mino Washi Japanese paper. Having founded the company at the young age of 17, Doshun expanded his business to include not only the manufacture of Mino Washi Japanese paper, but the nationwide sales of paper-making materials, such as Ganpi (a bark of flowering plant) and Nebeshi (a kind of hibiscus). He joined the Yuseigumi (a group of influential people in the Mino Washi Japanese paper-making industry formed between the Meiji era and Showa era), and then served as the president of the National Paper Materials Union. Doshun also contributed to his hometown, Mino, in his 20 years as a councilor of the Mino town council. He was able to succeed in the Mino Washi business thanks to his strong entrepreneurship, his love of his hometown and the indomitable spirit of Toitsu Furuta.

Left: Photo of Doshun Ishikawa. Right: The founder mayor of Mino, Taiichi Ishihara, surrounded by members of the Yuseigumi

Shigeru Ishikawa, the second-generation president of Ishikawa Paper Goods Ltd., worked to develop the Japanese paper-making materials business his father Doshun had created. In order to survive the controlled economy during the Second World War and postwar eras, he started to develop a new business making paper for metal printing in 1946. Shigeru Ishikawa was a great craftsman who had strong enthusiasm for research, fogetting food and sleep to improve the quality of his products. As mimeographs proliferated, he developed the company's own metal printing paper brand, "Queen Heart." With the convenience of multi-colored printing and great durability to withstand over 4,000 printings, "Queen Heart" was used by many printers and the factory ultimately succeeded in getting certified as a designated Japanese Industrial Standards (JIS) factory.

Left: Shigeru Ishikawa worked hard to hire relatives and citizens who were evacuated during and after the war. Right: Nebeshi, a material used to make washi paper

Left: Labels which explain great durability of our "Queen Heart" brand Metal Printing Paper and an advertisement design at that time.

Ishikawa Paper Goods Ltd. established a strong position selling Japanese paper-making materials and manufacturing mimeograph printing paper, but with the advent of chemical raw materials, typewriters, and copy machines, it became necessary to expand into new business. As the third-generation president, Michimasa Ishikawa found a new way forward for Ishikawa Paper Goods Ltd. He established a Japanese goods manufacturing department to produce stationery and souvenirs made with Mino Washi Japanese paper. For the Discover Japan tourism boom in the 1970s, sales of our Japanese paper goods and Japanese accessories grew steadily. From this opportunity, we developed original products to utilize our company's technology as a pioneer in Japan's new Japanese goods processing sector. Around 1975, the company was reborn from the paper-making materials and the mimeograph printing paper businesses of the past into Mino Washi Japanese paper goods and Japanese accessories manufacturer of today.

Left: Michimasa Ishikawa, the third-generation president, served as the mayor of Mino City in 1995 to achieve his dream of contributing to community development. He served as the mayor in Mino City government for 18 years and 5 months. He was awarded the title of "Honorary Citizen of Mino City" in 2015 for his great achievements, including the completion of the “Udatsu” traditional buildings preservation district, and the registration of Honminoshi Japanese paper as UNESCO intangible world heritage. He was the third person ever to receive this award in 60 years of the Mino City Municipal government. Right: The banner that hung in Ishikawa Paper Goods Ltd when Michimasa poured his heart and soul into his work in the 1970s still hangs today.

Left: The technology at that time is still alive today. Right: Kaishi card holders, tissue holders and card holders that have been popular products since 1970s.

In 2006, the fifth-generation president, Michihiro Ishikawa, found opportunities to evolve further, not content to rest on the laurels of the company's century of history and tradition. Those included strengthening ideas for marketing in dramatically changing times and creating products to be enjoyed by more customers including customers abroad. In November 2014, Honminoshi Japanese paper was registered with UNESCO as intangible world cultural heritage and Japanese Washi paper attracted attention from around the world. Inquiries about our company's Mino washi Japanese paper goods have increased in the lead-up to the 2020 Tokyo Olympic Games. However, our spirit fostered throughout our long history will remain unchanged. For the future, Ishikawa Paper Goods Ltd. will continue to "Present Heart of Japan" with our kawaii (cute) products from Mino City to the world.

The Tokyo International Gift Show, we exhibited for our 15th consecutive year in 2015.

Left: Our kokeshi dolls are popular among foreign tourists. Right: Our sincere commitment to produce each and every individual item has remained unchanged throughout our long history.